As we have previously hinted, leagues will soon be coming to Battleriff and we want to give everyone an introduction on how they will operate and how you can take part.

First of all there will be two leagues, the Amateur League and the Pro League. Both leagues will take place on the EU server, utilize the same set of rules and work identical to each other but differentiate in requirements to join and the prize pools offered.

The Pro League will be invite only and have a limited number of spots available, the first season will start with 120 spots which are direct invites. There will be some criteria to fulfill to keep your spot in between seasons in the Pro League.

While these are the initial prize pools for Season 1, we look forward to reward all participating players further as we progress with the seasons.

How you play in our leagues is done in a similar fashion of how our current ladders work but will have some key features setting them apart:

Just as with ladders the following features remain intact:

We believe the best of 3 format in last hero standing will make for the best pace in how the leagues and the matchmaking plays out.

As we learn more on what the official competitive format will be for 2019 we will most likely look to switch to the new system for our upcoming seasons.

Below is a table explaining exactly how much league score is won or lost depending on your current 'league tier' and how the decay system works. 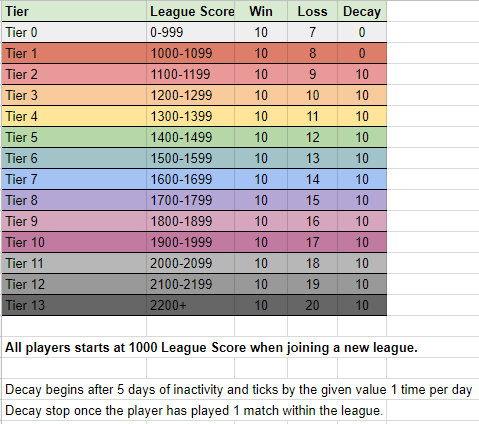 We will evaluate the parameters of this system after Season 01 has ended and had a chance to look through all statistics.

We would like to hear feedback from all participating players regarding the score system and league open hours once you've had a chance to try it out. Our goal is to find the best balance where winrate matters while not making it feel too "grindy". If something feels off we will work with the players to fine tune and improve before Season 2 starts.

UPDATE The League Score system for season 2 has been updated and is now working like this:

We expect the following launch date:

We will of course still be hosting ladders on Battleriff which everyone can take part in. There will be a new weekly Open Ladder which does not have any requirement on global ranking score to join, open 24/7.

We will also be hosting at least 2 shorter daily ladders each week featuring unique rules and / or deckbuilding challenges.

We look forward to improve the leagues as we move along. With the feedback from our players we hope to make each season better than the last and offer a truly competitive environment.

If you intend to take part in the Amateur league you can already prepare yourself by accumulating 300 Global Ranking Score on your Battleriff account by playing in ladders. This will ensure that you gain entry on the launch day.

All information in this article such as rules, formats and dates are preliminary and are subject to change as we continually work on launching the leagues. For questions or feedback, contact: jens@battleriff.com